What is a servo motor?

Whereas common electric motors run continuously and serve as a source of motive power in machinery, servo motors incorporate a control mechanism and are able to rotate by a specified angle and stop at a precise position. These capabilities have led to their use in equipment control in fields as diverse as industry and hobbies, with applications ranging from the positioning of joints in industrial robots to the control of rudder angle on radio-controlled aircraft.

In other words, servo motors get their name from the fact that they can be relied upon to operate "exactly as commanded". Any electric motor capable of controlling parameters like position and speed is called a servo motor, regardless of how this control is achieved.

Accordingly, the use of this term sometimes encompasses stepper motors and coreless motors. But, for our purposes here, a servo motor will be defined as a motor that has an encoder (rotational motion detector) together with a driver that uses information from this encoder to control speed and position (rotational angle).

Like servo motors, stepper motors have the ability to control their angle of rotation based on an external input, and therefore are also able to be used for positioning machinery and similar applications. However, these two types of motors differ in the following ways.

Servo motors have an encoder (rotational motion detector) that can determine their rotational position and use this information to perform feedback control of motor position. This provides precise stopping accuracy and the ability to move back to its original position should motor position deviation occur when stopped. For stepper motors, in contrast, the rotational angle of the motor is proportional to the number of input pulses. Accordingly, the driver controls position based on the number of input pulses it receives from the controller. Although this avoids the need for a position sensor, it also means that there is no way to detect position deviations. Unexpected changes in load, for example, can result in the motor getting out of synchronization (meaning the rotational angle of the motor differs from the angle specified by its input). 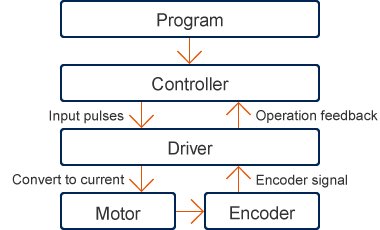 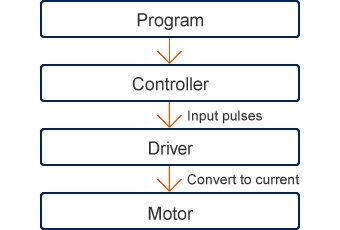 Servo motors can operate at high speeds and also deliver reliable torque over a wide speed range, from low to high. While stepper motors can deliver high torque at low speeds in particular, their torque diminishes with speed and therefore are not well suited to high-speed operation.

The technology of servo motors has advanced significantly along with advances in industrial robots.

Interest in factory automation started growing in the United States from the 1950s, initially involving mechanisms such as belt conveyors, automatic machinery, and industrial robots. While early automated machinery and industrial robots tended to use hydraulics or pneumatics to control actuator positioning, they had problems in terms such as accuracy, operational reliability, the associated plumbing, and hydraulic fluid or air leaks.

Subsequently, the use of DC servo motors grew through the 1950s and 60s as their technology improved, and they began to be fitted in industrial robots in place of the troublesome hydraulic and pneumatic mechanisms.

AC servo motors, meanwhile, emerged in the 1980s. Their practical benefits include making robots smaller and lighter, and as a result, they now make up the bulk of servo motors used in modern industrial machinery.

These are servo motors driven with a brushed direct current (DC) motor. Although DC motors are easier to control than AC motors and were widely used in the past for their small size and low cost, advances in AC motor control technology has seen fewer opportunities for their use in recent times.

These are servo motors driven with an alternating current (AC) motor. Although their control is more complex than that of DC motors, advances in control technology enabled them now to be the most common type of servo motor.
Depending on their drive mechanism, AC servo motors can be divided into synchronous motors (SMs) and induction motors (IMs). The difference is based on whether or not they have a permanent magnet.
SMs incorporate a permanent magnet. To increase motor output, the amount of permanent magnet usage (which are expensive) increases, and therefore makes them cost more. For this reason, they are widely used for low power applications (up to 10kW). However, with the emergence of high-performance permanent magnets in recent years, synchronous AC servo motors are now the default option.
IMs do not use permanent magnets and tend to be used in higher output applications (10kW or more).

Given their characteristic of accurate positioning, servo motors have a wide range of uses in applications such as industrial robots and precision machinery. Application examples include the following:

Overcoming your problems with servo motors from ASPINA

ASPINA supplies its servo motors as system products that incorporate drive and control systems as well as mechanical design. These are backed by comprehensive support that extends from prototyping to commercial production and after-sales service.
ASPINA can offer solutions that are tailored to suit the functions and performance demanded by a diverse range of industries, applications, and customer products, as well as your particular production arrangements.

ASPINA supports not only customers who already know their requirements or specifications, but also those who are facing problems at early stages of development.
Do you struggle with the following concerns?