What is an electric motor?

Not only do electric motors provide a simple and efficient means of generating high levels of drive output, but they are also easy to make smaller, allowing them to be incorporated into other machinery and equipment. As a result, they are found in a wide variety of applications in both industry and daily life.

Do you remember being taught Fleming's left-hand rule at school? Electric motors are an application of this rule, with the force generated by electric current flowing through a coil in the presence of a magnetic field causing the motor shaft to rotate.
In the diagram below, Fleming's left-hand rule tells us that an upward force is generated when current flows perpendicular to the magnetic field from the magnet*.

How rotation is achieved in an electric motor

In the case of a brushed DC electric motor*1, for example, this force can be used to sustain continuous rotation by reversing the direction of current flow at each half-turn of the coil (which is achieved by means of the brushes and commutator*2) 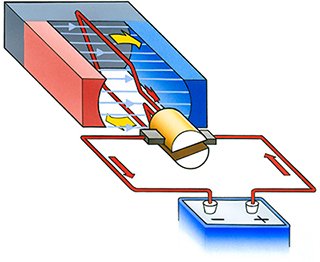 The British scientist Michael Faraday is recognized as being particularly influential among the many scientists from the 19th century who played a part in the invention and development of electric motors. In 1821, Faraday conducted the successful experiment in which the rotation of a wire was achieved using a magnet together with a magnetic field generated by an electric current. He went on to invent the law of magnetic induction in 1831, laying the groundwork for significant progress in electric motors and generators.

Over time, many other types of electric motors were devised, along with structures that can be considered the archetypal DC motor.

Subsequently, in 1872, the practical electric motor was not so much invented as discovered when one of the generators exhibited at the Vienna World's Fair started rotating on its own after being accidentally connected to another generator. This led people to realize that the way generators worked could also be used in motors. The rapid growth that followed in the practical use of generators was such that they became a mainstay of many industries in the 20th century.

Whereas electric motors convert electrical energy into rotation and other forms of mechanical energy, generators perform the reverse role of converting mechanical energy into electrical energy.
Despite having these opposite functions, motors and generators are very similar in design and principle of operation. In fact, a simple experiment in which two model motors are connected together is all it takes to demonstrate that an electric motor can also operate as a generator.
Naturally, given the different ways in which they are used, the two types of machine have always been developed separately.

These are motors driven by a DC power supply. They are grouped into brushed or brushless (BLDC) motors depending on whether or not they use brushes*1.
Whereas brushed DC motors only need to be connected to a DC power supply to run, brushless DC motors require a sensor to determine the orientation of the rotor's*2magnetic poles and a drive circuit to supply the appropriate current. 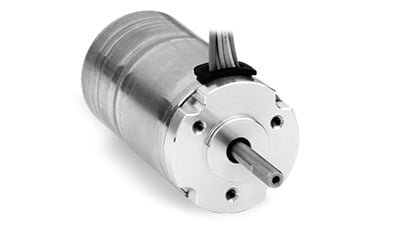 These are motors driven by an AC power supply. They are grouped according to whether this power supply is single-phase*1or three-phase*2.
Single-phase motors are further grouped into capacitor motors that use a capacitor*3to generate torque and shaded-pole motors that have an additional coil (winding) called a shading coil*4.

These are motors that rotate by a fixed step (angle) each time a pulse*1is input.
Stepper motors can be grouped by the structure of their rotor. Permanent magnet (PM) motors*2have a magnet in the rotor*3, variable-reluctance (VR) motors*4have an iron core, and hybrid motors have both. 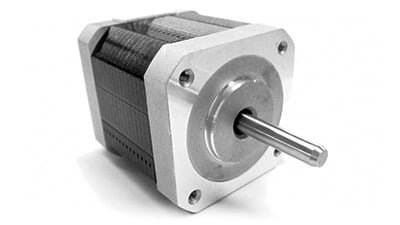 The table below lists the main features of the three different types of motors.

A variety of other types of electric motor exist in addition to those listed above.

While electric motors are used in many different ways, the following lists common applications for brushless DC motors and stepper motors supplied by ASPINA.

The excellent halting accuracy, high torque at medium and low speeds, and superior responsiveness of stepper motors means that they can be used in a wide range of drive applications that demand precise control.

Overcoming your problems with electric motors

ASPINA supplies not only standalone stepper motors, but also system products that incorporate drive and control systems as well as mechanical design. These are backed by comprehensive support that extends from prototyping to commercial production and after-sales service.
ASPINA can offer solutions that are tailored to suit the functions and performance demanded by a diverse range of industries, applications, and customer products, as well as your particular production arrangements.

ASPINA supports not only customers who already know their requirements or specifications, but also those who are facing problems at early stages of development.
Do you struggle with the following concerns?