What is a PSC motor 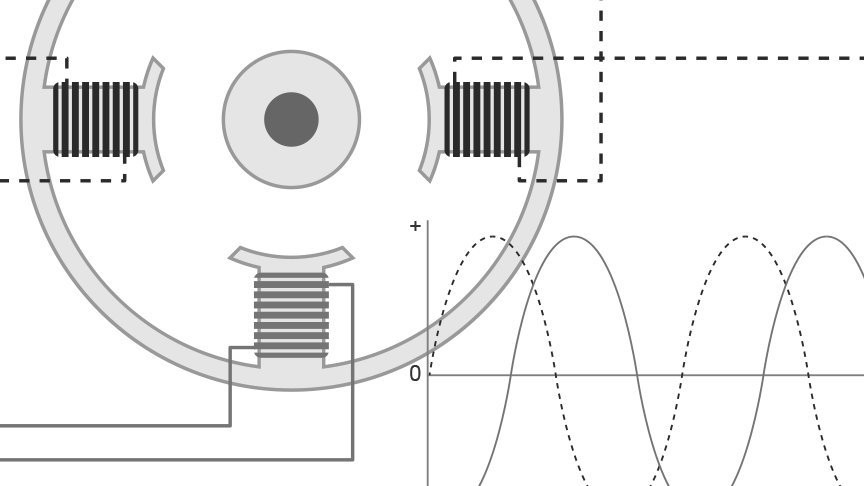 A Permanent Split Capacitor (PSC) Motor is a type of single-phase AC motor; more specifically, a type of split-phase induction motor in which the capacitor is permanently connected (as opposed to only being connected when starting).

AC motors can be divided into single- and three-phase motors depending on whether they are driven by a single*1- or three-phase*2 power supply.
A number of different types exist for single-phase induction motors. One of these involves using a capacitor*3 to generate a magnetic field in such a way that it simulates a second power supply phase, thereby generating the torque needed to start the motor rotating*4. Such motors are called "capacitor start motors" to reflect the use of a capacitor for this purpose. The category also includes motors in which the capacitor remains connected at all times (not just when starting) and these are called "capacitor run motors" or "permanent capacitor motors".

When the power supply is turned on, the current flows first in the main winding and then, with a short delay due to the capacitor, in the secondary winding. This difference in the main and secondary winding currents takes the form of a phase difference (meaning their waveforms are offset from one another on the time axis), causing the peak magnetic field to alternate between the two windings and thereby generating a torque that starts the motor rotation. 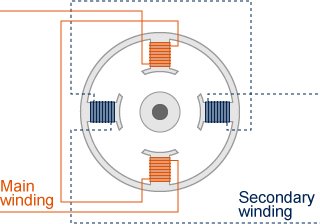 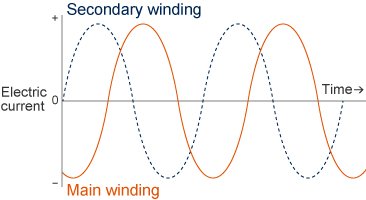 Background to development of PSC motors

One of the principles behind the single-phase induction motor (PSC motor) is the phenomenon of "Arago's rotations" discovered by François Arago in 1824. His discovery was that, when a magnet is rotated adjacent to a disk of non-magnetic material (a metal such as copper or aluminum that is not attracted by a magnet), the disk also starts to rotate along with the magnet.

At end of the 19th century, Nikola Tesla, recognized as one of the main proponents of the alternating current (AC) electricity system, invented the first practical induction motor and established the associated technologies, leading to the extensive uptake of AC motors in industry. The subsequent emergence of simple and low-cost single-phase induction motors that featured ease of use and compactness led to even more widespread use of these motors to power home appliances and other machinery in a variety of settings, including homes and small/medium scale factories.

Nowadays, however, electronically commutated (EC) motors have become commonplace in a wide range of fields, being both more efficient and easier to use than single-phase induction motors. These EC motors are commonly known as brushless direct current (BLDC) motors.

While capacitor motors are practical and easy to use, EC motors have come to be widely used in a diverse range of applications due to advantages that include superior energy efficiency and easier control of speed and other aspects of motor performance.
The following table lists the advantages and disadvantages of the two types of motor.

While the ability of PSC motors to run on familiar single-phase power has led to their widespread use in areas like the common household, small scale factories and agriculture, the use of EC motors has increased in recent years.

Applications for EC motors include the following.