Limits of speed and applications pushed beyond - stepper motor 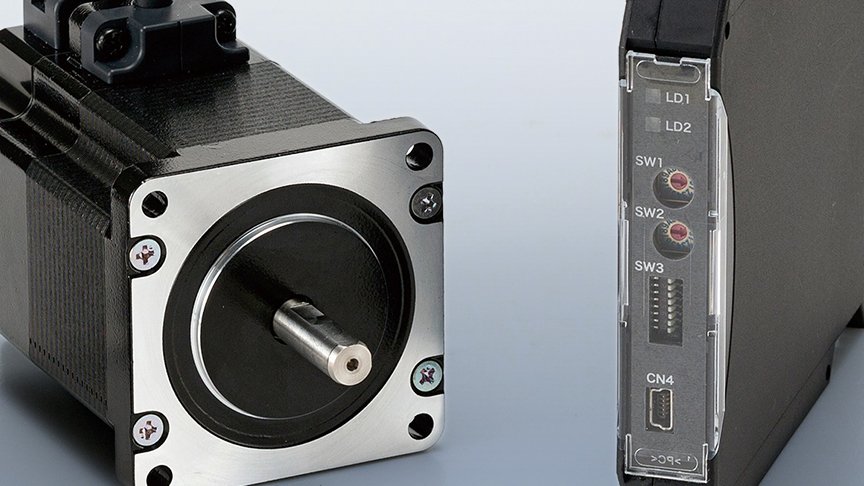 "What is the key to improving manufacturing productivity?"
"Shortening takt time" is one of many possible answers to this question. Takt time (production cycle time) is the time it takes to produce one product. A shorter takt time means that more products can be produced in a given period of time, resulting in higher production efficiency.

Servo motors that utilize an encoder for closed-loop position control are widely used in semiconductor production machinery. Stepper motors could be an alternative option, providing open-loop position control without the use of an encoder and benefiting from being smaller, more efficient, and generating less vibration than servo motors. Unfortunately, they also suffer from poor stopping accuracy and are not well-suited to operating at high speed.

If it was possible to develop a motor that combines all the benefits of a stepper motor with stopping accuracy and high-speed performance similar to that of a servo motor, it could help customers improve their manufacturing productivity by providing a more effective way to speed up the production process.

It was with this in mind that ASPINA combined closed-loop drive using an encoder with proprietary software to develop a stepper motor capable of high-speed performance and excellent stopping accuracy while still keeping the benefits that come from a stepper motor.

The improvement in stepper motor stopping accuracy was achieved by using closed-loop control with an encoder, similar to that used with servo motors. To enable the stepper motor to operate at high speed, however, it was also necessary to develop a new motor current control technique.

First of all, electric motors work by using an electric current to generate a magnetic field in such a way that the resulting magnetic force causes the motor shaft to rotate, the same configuration as a generator in which rotation of the shaft produces electric power. As a result, the action of the motor's rotation causes electricity to be generated (called counter-electromotive force or back electromotive force). As this counter-electromotive force increases with increasing speed, the voltage generated (reverse voltage) increasingly cancels out the drive voltage until a point is reached at which no further speed increase is possible.

Stepper motors work by controlling the current so as to rotate the motor in small steps, and for this purpose they have a greater number of internal magnetic poles than servo motors. This makes commonly-used stepper motors more prone to counter-electromotive force and therefore less suited to high-speed operation.

To address this, ASPINA adopted a technique called "field weakening" control. Specifically, this involves using a method called vector control that divides the current into a torque component (q-axis) and field component (d-axis), with each component controlled independently. To prevent the drive voltage from being canceled out by the rise in reverse voltage that accompanies increasing rotational speed, the control technique works by weakening the field component only of the current, thereby reducing the counter-electromotive force.

The problem is that failure to control this field weakening precisely can result, not only in lower motor efficiency, but also in the runaway acceleration of the motor. To prevent this, ASPINA devised its own new algorithm of current vector control that takes account of the torque component in the field weakening calculation. 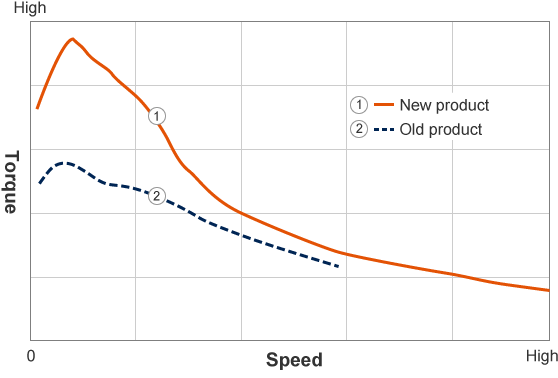 By doing so, ASPINA succeeded in building a new stepper motor with high stopping accuracy achieved using an encoder and closed-loop control that also has a wide operating range that extends up to high speeds where the reverse voltage is significantly higher than the drive voltage.

As motor loads and operating speeds vary widely across different customer applications and requirements, commercialization of the new motor included the development of algorithms and software to cover this wide operating range.

ASPINA built a variety of test rigs to simulate the equipment in which customers use stepper motors and utilized these to conduct extensive testing under variable moment of inertia and friction load conditions. By honing the motor's different technologies in this way, ASPINA was able to offer a more complete motor.

ASPINA also received positive feedback about the benefits of having staff from motor users participate in experiments and testing alongside ASPINA engineers.
The engineers each brought their respective knowledge and skills to the tasks of product development, which include performance testing as well as the development of the individual technologies and product functions.

By providing both precise position control and high speed, use of the new stepper motor has the potential to significantly shorten takt times by eliminating unnecessary delays in production processes.

Stepper motors are inherently capable of providing torque equivalent to a servo motor with low power. Another feature of stepper motors is that they have a large number of stable rotational orientations, a consequence of their having so many magnetic poles. By utilizing their characteristics of small size (efficient use of space), efficiency, (low power consumption), and low vibration, there is scope for deploying these motors, not only in production machinery, but also in other products where they have not been used in the past. Possibilities include reducing the vibration of items being conveyed on conveyor systems or use in camera drive mechanisms to reduce image blurring.

Meanwhile, in the future, ASPINA's plans for stepper motors include the development of integrated models that incorporate the driver and control circuits and other wiring into the motor.